Dude, I'm up past 2 AM (when I'm supposed to be waking up at 7 AM) because iTunes was being an ass. It won't let me sign on, saying either my ID can't be found or my password is incorrect; and being the hard head that I am, I couldn't sleep without solving the problem. Seems like a lot of people are suffering this problem. Mine is solved, for now. Hopefully forever. iTunes suck. And I suck.

My new iPod Touch is coming tomorrow! Hopefully, unless I miss the postal man. It'll replace my stolen one from months ago. The anticipation is ridiculous. I've gone for so long without music that I had to borrow my dad's iPod for the last few weeks. But no more! I'll have my own iPod that will actually tell me what time it is. The clock owns me.

Yesterday there was a book sale at the library. 25 cents for all paperbacks. I got four for me. Only four. Now I'm starting to regret it. I wish I had gotten more :(

I went to the Asian fabric store and scored these for $5/ea. I think that's cheap. Wish there were more choices, but these were the only 2 left that didn't look like this.

They're baby blankets, but since I have no babies, I bought them for my cats. So cute I want to barf. Will have to take some pictures of my cats sporting these blankets later on. 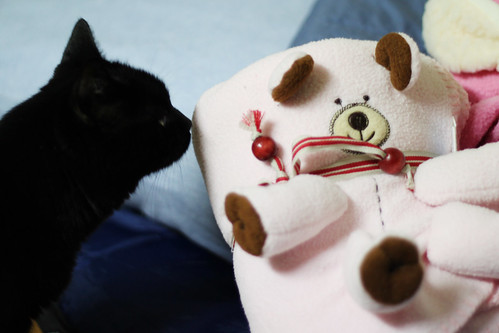 My old Sims 3 disc was stolen with my Macbook Pro. I was so excited to receive my new disc last week and some awesome sets from the Sims store that I've spent the last few days working on a new house.

I'm not done yet. It still needs refinement, but I'm in no rush. Building the house is my favorite part. I love engaging my creative side. This is my favorite house so far since it doesn't depend on the use of red (dramatic, but it gets old). This design was inspired by the fairy tale set, but instead of going all out (which is too busy for me), I simplified it. I think I leaned toward modern a little too much.

Thanks to my sister for getting me hooked! My life is complete.

I'm excited about the new Sims Medieval game coming out next March. Seems like it'll be quite a wait since it's only August. The Sims 3 expansions don't look impressive enough. I want some Sims Pets!

I need your help. This is driving me crazy.

No matter which layout I use, I can only view the first few (about 8) entries on my friends' custom/filtered page. There is no button that says "Go back 10 entries." When I go to Customize Journal Style, next to Number of journal entries to show on friends page, no matter what number I put into the box (ie. 10, 20), I still get only the latest 8 entries. There's nothing in the custom CSS about this and I'm sure it's not the CSS because I've tried a bunch of layouts already.

The only way for this "Go back 10 entries" button to show up is if I view all my friends' entries. As in all the entries from every single community I belong to, and I seriously don't want to do that.

What am I missing? It used to not be like this. Now I can't read any of my friends' old entries unless I go to their journal. Is it because LJ has a rule now where I can only view entries from the last two weeks?

Can't say that my life has been going too well. My iPod Touch was stolen at work awhile back, and only last week, some idiot smashed my sister's car and stole my new MacBook Pro. It's unfortunate because the laptop was buried under clothes and bags while lying in the trunk. I cried. Obviously. Can't deny I was thoroughly upset over losing my laptop that I've saved money for for two years.

I questioned whether the good deeds I've done have actually made a positive difference to the human race, etc. etc. all that spiritual crap. Then I questioned why these bad things kept on happening to me, and especially my sister. Now I don't bother because there's no use in torturing myself with the ideas of spirituality. I accept them as shit that just happen to people.

My sister felt guilty. My mother pitied me for two days. And my father told me to suck it up. Shit happens. Van bought me food cause she felt sorry for me. Sometimes, I allow myself to feel sorry for me too.

The Spain vs. Germany game's got me all nervous. Here's to hoping Spain does well. My father can't decide who he hates more. His only choice now is to hope the Netherlands win only because he hates both Germany and Spain.

I let my boss's daughter play with my iPod touch while I was working today, but her mother made her help me with the work, so she left it lying around the store, and when we came back to look for it, it was gone. Since the store just got a million surveillance cameras, we were able to see the bitch who took my iPod, but unfortunately, it was too late to catch her. She already left the store. Some people are so shitty.

I want to say it was my fault that I wasn't more careful, but I'm tired of blaming myself all the time. I'm upset, obviously. The iPod was a gift from my sister, and getting a new one doesn't make me feel any better because this one has sentimental values. In any case, I can't afford a new one now, so buying another one is out of the question anyway. I just gave my mother $200 to help pay for the repairs on my car without actually telling her the money was from me, so it feels wrong to ask her for money back.

This morning, Calvin harassed me for two hours straight. First, he scratched and punched my face and head at 5 AM because he ran out of food. Then when I filled up his bowl and kicked him out of my room, he tried digging a hole to get into my room for another hour. It's sad to think I wanted to send him away to Berkeley when he was the only one who came to comfort me about my stolen iPod when I came home today.
Collapse