I'm having such a memorable day today.

Yesterday evening, a hummingbird flew into my window. I'm assuming my newer cat, Mr. Grey (he doesn't have a name yet because he's a stray who's trying to make my house his), was chasing after it so it panicked and flew into the window. My dad opened the door to see what the loud noise was and the bird flew inside the house. Mr. Grey chased after it and, snapped!, he had the bird inside his mouth. My dad pried his mouth opened and the bird was thrown onto the ground. Eeps. I ran out to snatch the hummingbird up. It had no injuries, as far as I could see, except for the nasty cat saliva.

It was pretty dazed, so I put it in a box and covered it up, hoping it'll recover. This afternoon, it was still closing its eyes and looking lethargic. I took it outside, opened the cage, but it didn't come out, just kept on looking like it's on the verge of death.

I sat a few feet away from it, hiding behind a table. Then another miracle happened! A bird in a tree next to the cage started chirping. The injured hummingbird pulled its head up, opened its eyes wide, and looked around excitedly. After two minutes, with the other bird's chirping still continuing, the hummingbird raised its wings and half hopped, half flew out of the cage.

You know what they say about the feeling a mother gets after the birth of her first child? I felt like that. I don't think I was ever so happy or proud in my whole life—seeing my little one take flight. None of the birds I saved from predators have ever survived, but this one did and I was overwhelmed with pride. Not that I did much though, my dad saved it and the other bird encouraged it, I'm sure. Nevertheless, that moment was so precious I could have died of overwhelming happiness.

I ran after it with my camera, but damn 55mm lens, they failed me. The zoom is ridiculous, not like my sister's 300mm zoom.

Here are some pictures anyway. They aren't the best given the lack of lighting in my house and I couldn't use flash lest the bird gets even more panicked. 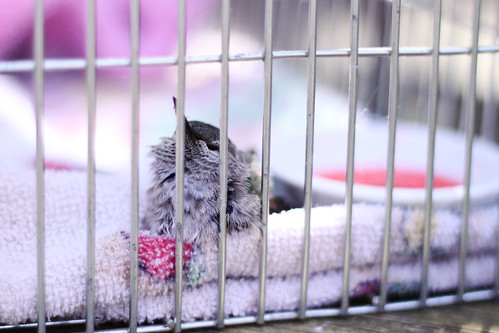 Pills used to be so easy to swallow, but the older I get, the harder it is for me to swallow. Why are vitamins so dang huge?
Collapse