Sometimes, you can't get away from yourself. Or your height. Or other people's jokes.

I'm tired of looking at the iPad. When is Apple going to update their Macbook Pro?

Peektures! Although ... I bet you guys have already seen these if you have me as a contact on Flickr. 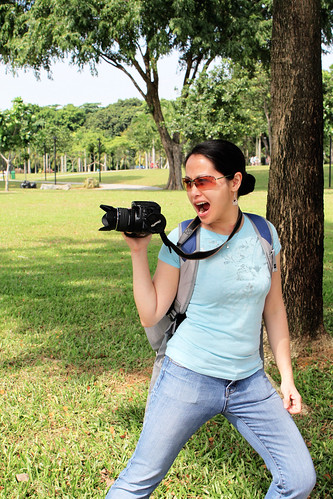 Castle Beach, which I sometimes spell as Cattle Beach, though there are no cattle, is as hot as hell. Hotter than the center of the country, if that's at all possible.

Here's the problem with the equator. The Earth's position puts the equator nearest to the sun. It's like BOO YA sun! I'm in your face! The flaming ball of fire heats up the ocean. Water does its floaty thing in the air (called water vapor), like fog, which attaches to anything solid. Being near the beach is actually more humid because there's more moisture in the air due to the fact that it's just risen from the depths of hell the ocean. Being in the center of the country near the middle is less humid because a lot of the moisture has already attached itself to other solid while the wind takes it evilly giddily across the country.

If it's possible, I was more miserable near the beach than I was in downtown Singapore. Haha. I love how my trip is only miserable due to weather while everything else is great. Honestly, the beach was actually my least favorite place. I guess I was never much of an ocean girl. I enjoyed the gardens and zoo/jungle immensely, but the ocean just didn't lift my spirits. I wasn't in awe.

The houses near the ocean were very Beverly Hills, in an Asian/Singapore kind of way. Although they didn't seem to have air conditioning like the apartments in downtown (I might be wrong), they were large, clean, and white. Very I-can-afford-to-live-near-the-ocean-in-houses-instead-of-apartments kind of thing.
Collapse