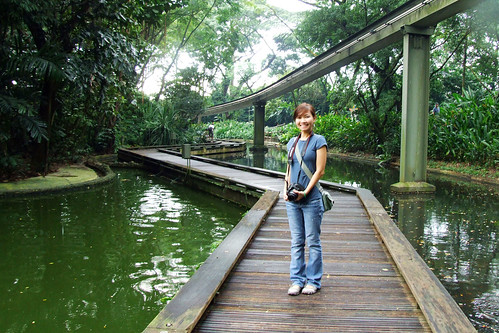 Sometimes I have one of those days where I'm completely miserable due to a failed adventure, but at the end of the day when I'm back at home after a shower, I look back on it, laugh and say what a memory.

Right after getting on the bus around 3 PM, it started pouring. The rain crashed down the whole ride to the bird park. It was Mother Nature's sick sick joke. I bet she was bored, so she said Haha, I'll make rain right when they're leaving, SUCKAS! I was tired, gross, and sweaty (we spent most of the day at the Science Centre), but my cousin and her friend refused to let me go home. When we arrived at the park, the rain slowed down a bit, but was it still pouring. To my disappointment, my cousin still urged me on. With only one umbrella, four people, and three cameras, we couldn't do much. We paid a whole lot of money to take dark pictures (because of the rain) of birds that were hiding from us (because of the rain).

We mostly ran from one place to another, clearly aware that we were soaked, sweaty, sticky (because damn, the weather was even more humid, if that's at all possible and even hotter than before. My shoes were wet, my back was sweaty, my face was covered with a layer of dirt, and my hair was disheveled.

Then when we got to the indoors displays, we were freezing. Have you ever been soaked, but burning up, and then suddenly find yourself in a freezing, air conditioned room? And then after spending ten minutes freezing and adjusting to the cold, you walk right back into a hot and humid climate again? That's how fevers get started.

Fortunately, none of us caught a cold. My sister lost her flip flop, for a minute. The river of rain that rushed down the street dragged it along. She got it back, thankfully. But the rain left our dignity bruised. We ran like headless chickens here and there, hair flying like madmen and losing our shoes. To add to the misery, we had to make sure we weren't late for the last bus out of there, which left at 6 PM. So with limited time, light, and unlimited misery, looking back on it now, I have to say it was one of the best adventures of my life.

I was more than thankful to reach our hotel and shower. Who invented showers? They are the most therapeutic thing ever created.
Collapse