Here are the pictures for the last day in California and the first day in Singapore. 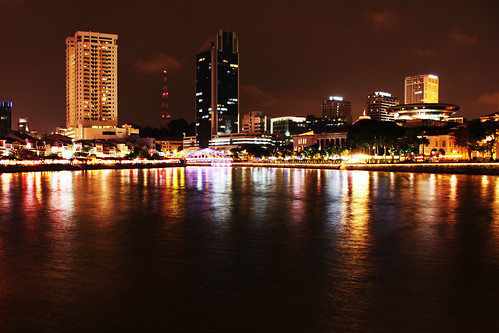 This is more of an entry for me than anything. Chances are I'll forget many things in a few months and this should help jog my memory of the wonderful (sometimes not wonderful) times I've had on my trip to Singapore.

Traveling time was about a day. Kill me now? The plane ride was tedious. Ahhh, the perks of traveling to Asia. More than 12 hours on one plane to the Philippines, and about 4 on another to Singapore. We were seated in row 92 of the 96-total-rows of the plane for the long flight. Well, really, are we ever so lucky as to sit anywhere but the back? I popped a pill for carsickness, pass out, and when I came to, my sister and I watched movies.

The people we were traveling with were Filipinos, and as with many Asian cultures, the people tend to pack as much as possible. 100 lbs of check-in baggage per person, plus carry-on. You can imagine how heavy the plane was. I'm sure if it could talk, it would cry out in pain.

But without much talking, it did just that. A few hours into the flight and the pilot announced that we would have to make an unscheduled stop in Guam to refuel. There was apparently too much weight. One hour we were delayed. That one hour made us late for our next flight. Sitting in the back rows, we were stuck. The flight attendant refused to let us off the plane first, so alas, so we stuck in the Philippines, with our flight to Singapore leaving without us.

Luckily, we were able to be seated in a later flight, only an hour after our missed one. I can't tell you the amount of times people have spoken to me in Filipino, only to have my brows pull together and my mouth fall open. Confused. Befuzzled.

When we arrived in Singapore, we called our cousin who was there as an international student. She directed us to City Hall (Train Station) near our hotel. We thought, why blow money on a taxi? Hell, we'll take the train. We were, as I like to call us in Vietnamese, cowboys—people who charged forward without fear. I don't know why I used the word cowboys. It just sounded cool. Really, it made no sense. Yeehaw.

But of course, the train ticket machine doesn't take any bills higher than $5, and we, apparently, were loaded with large bills that we've just exchanged in the airport. And alas, the ticket office doesn't sell one-time tickets, so back and forth we went from here to there to get change. And so we bought ourselves two tickets to City Hall.

Trains and I aren't a good combination, but my sister has taken the BART long enough to figure out the maps. I would get lost even with only one train transfer. When we got out at City Hall, we were in distress. Well, mostly me. The weather was insanely hot and ridiculously humid. I felt like my body was covered with soda and then baked out in the sun. Sticky. Hot. Sweaty. Within five minutes, my mood went from bad to worse. I wanted to run back to California with my tail (if I have any) between my legs and cry to my mother. But really, impossible.

Our hotel was small, but clean. The people courteous. The TV channels failed at entertainment. HBO was a repeat everyday. Everything else was sports. My cousin and her friend took us to Orchard for dinner that night. We had, to my dismay, Korean food that was too much like Vietnamese food. Fail. My cousin and her friends have known no other country than their own (and now Singapore). They didn't care much for food that wasn't like Vietnamese food and I couldn't stomach the idea of yet another Vietnamese meal.

After the meal, we took the train to Marina Bay, where we realized we didn't know how to use our cameras. Idiots, really, yes? My sister's was new to her, and mine was new to me. The pictures turned out like shit, to our dismay. Night shots are a bitch, but soon we were perfect photographers once again and trained models. With the shutter speed at 10 seconds, we stayed perfectly still for 10 seconds, while smiling like confounded idiots until our jaws hurt just so we could have a picture without flash.

My cousin's friend, after our initial meeting, realized how cool we were. Yes. Yes. (Because really, who doesn't love a happy idiot, and we sure were happy) :) And that photography can be fun and beautiful, if only he knew how to use his camera and learn a little thing called composition. I'm happy to say my sister took him under her wing and taught her everything she knew. *sniffles* So proud of my sister, who only a few months ago, was taken under my wing.

I exaggerate, of course. Surely I'm not the best of photographers, but we're all here to improve, and I'm glad we're moving forward instead of backwards. That would suck.
Collapse